Last night Son #1 and I attended the "Lesser-Known Presidential Candidates Forum" at St. Anselm's College in Manchester, NH. Click below if you just want to see all the photos from the event:

The requirement was participants needed to be registered and on the NH primary ballot and had not participated in any other candidate forums. In order to get on the NH ballot you need to be a a US citizen, at least 35 by time you take office, filled out the appropriate form and pay your $1000 to the state of NH.

The second hour were for the 8 Democratic candidates, although one was a no-show:

All the photos I took of the event are released under a Creative Commons Attribution license -- so you are welcome to use them as long as you give me a photo credit. (I won't turn down a check if a media organization would like to send an honoria my way)

Here are my notes/scribbling/impressions from last night's "Lesser-Known Presidential Candidates Forum" at St. Anselm's College in Manchester, NH on 19-Dec-2011. I'm just an interested NH voter, not a journalist so don't be surprised of my views and bias come through...

The format was 2 minutes for each candidate to make their case followed by questions from the panel --Beth LaMontagne Hall (Union Leader), Ambassador Terry Shumaker and NH State Representative Jim Splaine; Bob(?) Griffin was the moderator.


The second hour were for the 7 Democratic candidates, although one was
a no-show, so the seven where:

Vermin Supreme glitterbombs Randall Terry
Posted by MarcNo at 5:25 AM

My hp1233 netbook has been sitting around in my office for the last six months after the last Ubuntu upgrade. It was working fine, but the Natty Narwhal (11.04) upgrade caused it to hang when using wifi. See Bug #772859

So the end of last week I plugged it into my network switch and upgraded to Oneiric Ocelot. I was pleasantly surprised that the wifi now works and didn't require any fiddling around with random drivers or configs. Nicely done Ubuntu Team!
Posted by MarcNo at 3:09 PM

Follow the link to see all my photos from the NH Presidential Primary season (Summer 2011 through Winter 2012) Some photos are licensed under a Creative Commons license, while some are "All Rights Reserved" If you wish to use the latter photos, please contact me: marc at nozell.com 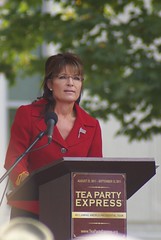 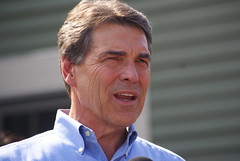 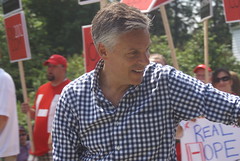 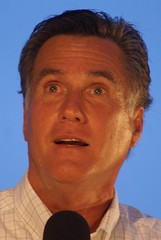 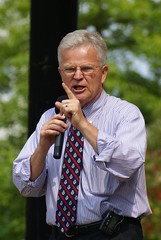 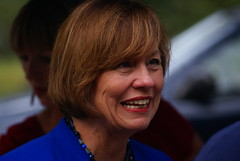 Note: Photos don't imply endorsement. But you could probably figure out who my favorites are...
Posted by MarcNo at 2:52 PM

NH is swarming with Presidential Candidates

This weekend Rick Perry was in Manchester.

Today Mitt Romney is in Concord speaking to a Tea Party crowd (with protesting a FreedomWorks-backed Tea Party group -- talk about a photo op!).

Anyone looking for a photo of John Edwards for use under the Attribution Creative Commons license?

This evening I upgraded my hp2133 notebook from Ubuntu/Maverick to the new Natty. The upgrade went smoothly but now the system hangs about 2 minutes after Broadcom 4311 802.11a/b/g wifi is enabled.

Some suggestions from IRC are to try the bcmwl-kernel-source or linux-backports-modules-net-natty-generic packages.
Posted by MarcNo at 3:09 PM

Someone asked for more info about the hw/sw as shipped with the DreamPlug:

I borrowed the a Kill-A-Watt device from the local library and plugged the DreamPlug into it.

Here are my unscientific observations.


Powertop didn't have much in the way of suggestions that affected power.
Posted by MarcNo at 3:00 PM

DreamPlug: no support for nfs-kernel-server

The folks on reddit were asking about NFS performance on the DreamPlug so I installed nfs-kernel-server. Unfortunately the Ubuntu kernel shipped with the DreamPlug doesn't support NFS:


So if you want to use NFS (and don't want to rebuild the kernel), you'll have to use unfs3, a usermode version of NFS. It doesn't support file locking nor wildcards for hostnames in /etc/export.
Posted by MarcNo at 3:01 AM

The webcam tool 'motion' is pretty nice, but it needs some tweaks to the base Ubuntu/Jaunty running the DreamPlug.


After a while of it running, you don't need the browser to be on the page, take a look in /tmp/motion to find all the JPG images and SWF 'movie' files. Eventually I'll probably change the directory to live on one of the USB disks...
Posted by MarcNo at 1:23 PM

My Dreamplug from Globalscale Technologies finally arrived yesterday and I'm just getting around to dig into it.

Trevor has tapped four trees and started the boiling down of the maple sap.

I choose you!, originally uploaded by marcn.

Panorama of PAX (aka PAXeast)

Monks from the Drepung Gomang Monastery are in Bedford

The Tibetian monks from the Drepung Gomang Monastery have a cultural presentation last night at the Bedford, NH that included a slideshow, demostrations of prayers, debating and the creation of a mandala.

I have three monitors in my home office connected to two different systems, which gives a lot of screen space, but I don't want to use two sets of keyboard/mouse. The open source package synergy lets you do that. (It also works on Windows systems too)

Sitting in front of me is nyx.local, an hp EliteBook 8530w (Ubuntu/Maverick) in a docking station connected to two monitors, keyboard and mouse. To the right is a monitor from an hp workstation xw8000 named mm.local (Debian/Lenny). It is a tucked away in the corner and a bit hard to get to the power button.

My morning routine is:

Now when I slide the mouse to the right it moves focus to the remote system!

Here is the ~/.synergy.conf file.

Email ThisBlogThis!Share to TwitterShare to FacebookShare to Pinterest
Labels: linux

This was created from 14 photos and stitched together using hugin. View the largest size (15M). The original was 21M, which is over Flickr.com photo size limit.